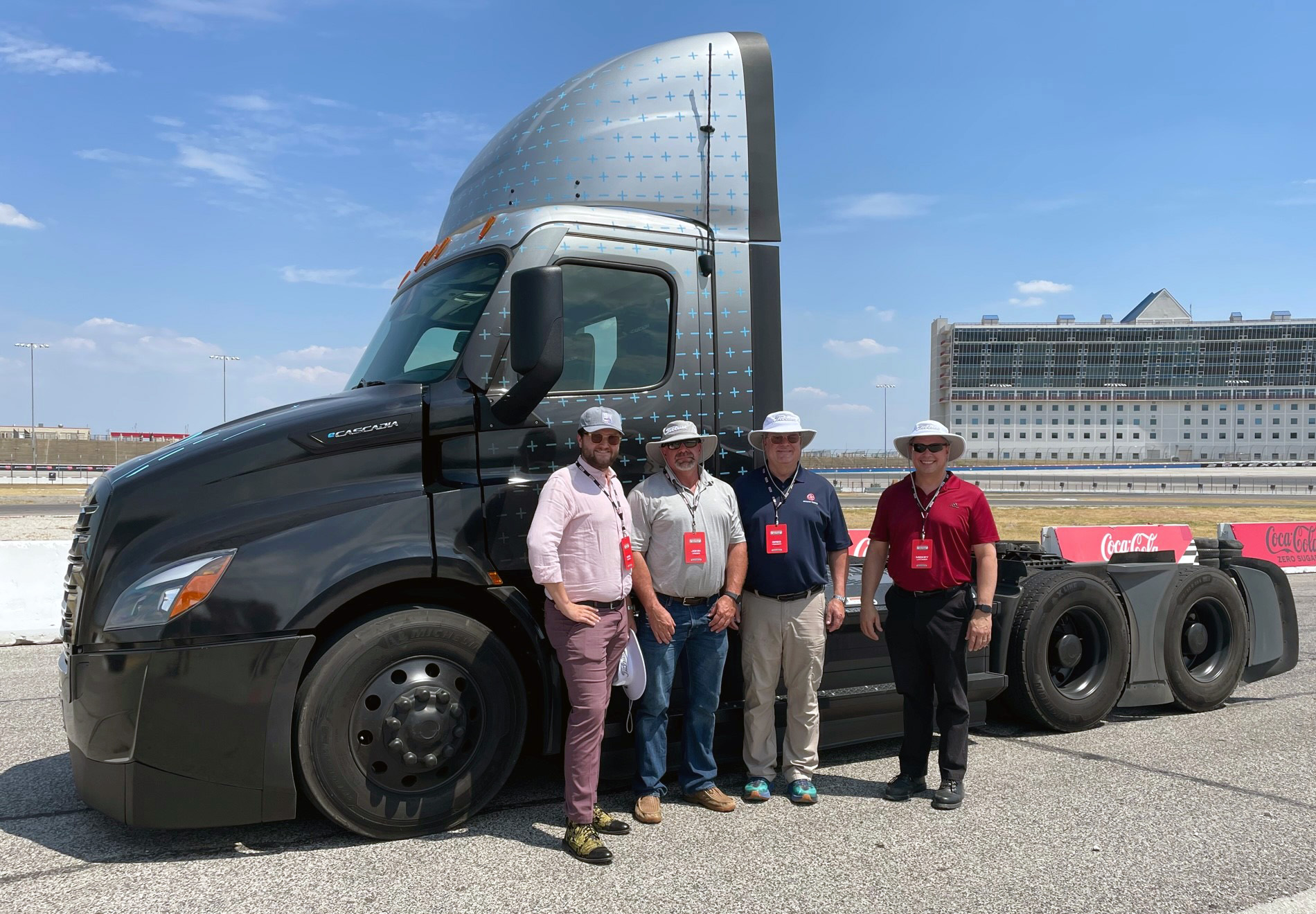 FORT WORTH, Texas (July 14, 2022) — While it will take time before electric tractor technology is suitable for Groendyke Transport’s business, members of company leadership were impressed during a test drive of all-new battery-electric Freightliner eCascadia day cab at Texas Motor Speedway on Thursday.

The 105-degree heat on the infield didn’t dampen the enthusiasm, as each member took turns behind the wheel. The trip was part of Groendyke’s larger initiative to keep its finger on the pulse of all new tractors, including those powered by alternative fuels like electricity and hydrogen.

“It had outstanding acceleration and was so simple to drive it almost felt like a go cart,” said Greg Hodgen, president and CEO of Groendyke Transport.

The team reported several advantages over current diesel models, including the stable, low center of gravity due to the bank of batteries, impressive torque and an extremely quiet, smooth ride. They also noted that, with the exception of the difference in engine, it was a standard, assembly-line tractor in most respects.

“You can feel the torque when accelerating,” said John James, director of equipment and procurement at Groendyke Transport. “It gave us a good look into the future of electric tractors.”

Class 8 eCascadias range in horsepower from 320 to 470 and have a range of 155 to 230 miles before needing a charge, depending on the model.

Mickey Lattimer, vice president of fleet at Groendyke Transport, was encouraged the demo unit was not a prototype, but rather a production model.

“If an eCascadia is ordered today, it would be exactly like the model we test drove,” he said.

Application within Groendyke’s fleet is still aways off for several reasons, according to the group. They cited payload and range, but the biggest drawback is the current lack of charging infrastructure.

Daimler Truck North America (DTNA), the parent company for Freightliner, has created the Detroit eConsulting team to tackle this issue. They help customers secure real estate, plan installations of charging stations and work with utility companies to ensure the local grid can handle the power needs.

“Our test drive was an exciting glimpse into the future of battery technology,” said Zane Hodgen, Groendyke’s legal intern. “We look forward to seeing Freightliner’s continued innovation into zero-emission trucks.”